Brain injury may be caused by trauma to the head or by a non-traumatic cause such as a tumor, aneurysm, anoxia or infection.

What is a Traumatic Brain Injury?

A traumatic brain injury (TBI) is defined as a blow or jolt to the head or a penetrating head injury that disrupts the function of the brain. Not all blows or jolts to the head result in a TBI.

The severity of such an injury may range from "mild," i.e., a brief change in mental status or consciousness to "severe," i.e., an extended period of unconsciousness or amnesia after the injury. A TBI can result in short or long-term problems with independent function. 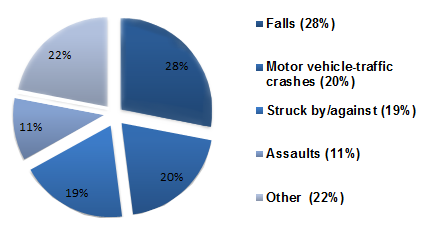 The Leading Causes of Traumatic Brain Injury are:

Blasts are a leading cause of TBI for active duty military personnel in war zones.

What are the long-term consequences of Traumatic Brain Injury?

The Centers for Disease Control and Prevention estimates that at least 3.17 million Americans have a long-term or lifelong need for help to perform activities of daily living as a result of a TBI.

TBI can cause a wide range of functional changes affecting thinking, language, learning, emotions, behavior and/or sensation. It can also cause epilepsy and increase the risk for conditions such as Alzheimer's disease, Parkinson's disease, and other brain disorders that become more prevalent with age.

What is a Non-Traumatic Brain Injury?

When most people think of brain injuries, they usually associate them with some sort of physical impact such as a car accident or an injury sustained in military combat. But there is another class of brain injuries known as non-traumatic brain Injury.

A non-traumatic brain Injury can be the result of an illness, oxygen deprivation, metabolic disorders, aneurysms, cardiac arrest, near-drowning experience, etc. In short, it includes injuries to the brain that are not caused by an external physical force to the head. Other nonviolent circumstances like tumors and lead poisoning can also injure the brain.

The most common instances of non-traumatic brain injury include:

Need help identifying the right brain injury rehabilitation center?
Discover if Shepherd Center is right for you or your loved one.

Please contact us at 404-352-2020 if you have additional questions about traumatic brain injuries, concussions, or anoxic injuries.